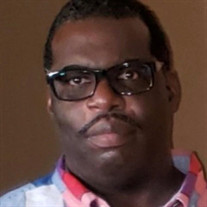 Billy Lonzell Baines was born on February 13, 1973 to the mother, JoAn Baines, in Jacksonville, North Carolina. Billy’s mother always referred to him as her “love child” because he was born one day before Valentine’s Day. Billy was raised by his grandmother/Mama, Dorothy Gene Baines. Billy joined his mother, JoAn Baines, his Mama, Dorothy Gene Baines, and a host of many other loved ones and ancestors on December 14, 2020. Billy leaves behind his Godson, Josiah Brown, whom he adored very much. Billy was very generous and loved being loved. Billy was not only a big brother to, Timiko Baines, Harold Phillips, Josh Phillips, and DeAndre Joshua Phillips, but also served as their provider and protector. Billy was close to his maternal aunts and uncles and often referred to them as his sisters and brothers. Billy was a Medical Assistant and enjoyed taking care of others. It was common for Billy to work three to four jobs simultaneously. He valued his independence and liberty. Billy spent his free time traveling and attending social events, most often with his best-friend and cousin, James Lee Brookshire. The two where often spotted driving up and down the 10 freeway to another adventure and another city. Billy loved to laugh and make others laugh. Billy was a great cook and enjoyed good food. Billy was also cared for by his great-aunt, Alice Laye, the surviving matriarch of the family. Billy had a deep affection for his great aunt. If she needed anything, he was there. It brought him great pride and joy to spend time with her. Billy cared deeply, gave generously, and laughed with an open heart. Billy was unconditionally loved and will truly be missed.

Billy Lonzell Baines was born on February 13, 1973 to the mother, JoAn Baines, in Jacksonville, North Carolina. Billy&#8217;s mother always referred to him as her &#8220;love child&#8221; because he was born one day before Valentine&#8217;s... View Obituary & Service Information

The family of Billy Baines created this Life Tributes page to make it easy to share your memories.

A comforting word from you means a lot.

Send flowers to the Baines family.