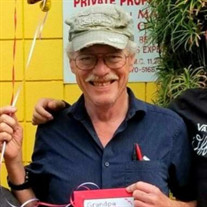 It is with deep sorrow that we inform you of the death of our beloved father and brother, Scott Patrik Henriksen. Scott died on November 22, 2020 at Huntington Hospital in Pasadena, CA. He was 71 years old and lived in Alhambra, CA for more than 35 years. Scott is survived by his daughter, Vanessa L. Henriksen (Covina), grandsons, Izaiah and Izaac Esparza (Covina), sister, Lisa Henriksen Backer (Del Mar), brother-in-law, Rushton A. Backer (Del Mar), niece, Joy Backer Kete (Cambridge, MA) and nephew, Jackson Backer (Irvine). He is predeceased by his mother, Carol Sands (San Diego), father, Glenn F. Henriksen (Mill Creek, WA), uncle, C. David Henriksen (Corona), and aunts, Joan Crowell (Goodletsville, TN), Harriet Sands (Loma Linda), and Frances Sands Pursley (St. Petersberg, FL). Scott was a caring father figure to Samantha Perdue (UT) and her family. Scott had worked as a self-employed accident investigator since 1983. He graduated high school from San Gabriel Academy (1967). He attended college at California State University, Los Angeles where he obtained his bachelor’s degree (1976) and master’s degree (1978) in psychology. He was a member of the Alpha Gamma Omega fraternity. He attended the California School of Professional Psychology, Los Angeles, where he earned his master’s degree (1979) in clinical psychology. Scott’s parents were Christian missionaries and he spent most of his childhood living in the Dutch West Indies (Curacao) and Venezuela. He had excellent command of the Spanish language and even learned to speak Papiamento. Scott was an accomplished musician and master accordionist, even performing for the President of Venezuela in the early 1960s. He enjoyed music, photography, sports, humor, and reading anything related to American history or politics. He enjoyed his friends and neighbors, waitstaff at the diner on Main Street and the baristas at his favorite coffee shop. Scott was known for his generosity towards others and quick wit. He was a gentle soul. Scott’s family is planning a memorial service to be conducted when the pandemic has abated. Scott (aka “Papa-Daddy-Scott”) considered his daughter and grandsons to represent the best parts of his life. Scott was loved by many and will be missed by those who knew him. We are brokenhearted by his death. In lieu of flowers, his family would like you to consider a donation to the Scott Henriksen Memorial Education Fund to assist his grandsons with educational expenses. To learn more please visit gofundme.com/f/Scott-Henriksen-Memorial-Education-Fund.

It is with deep sorrow that we inform you of the death of our beloved father and brother, Scott Patrik Henriksen. Scott died on November 22, 2020 at Huntington Hospital in Pasadena, CA. He was 71 years old and lived in Alhambra, CA for more... View Obituary & Service Information

The family of Scott Patrik Henriksen created this Life Tributes page to make it easy to share your memories.

It is with deep sorrow that we inform you of the death of our...

A comforting word from you means a lot.

Send flowers to the Henriksen family.